My 14 days were up at Storrie Lake State Park on Wednesday and I would have moved on to another state park but I had a date lined up for this weekend in Albuquerque and it didn't make sense to travel further north for just a couple of nights so I hung around Las Vegas, NM for three nights.  Wallydocking is not my favorite way to camp but it was handy and the price was right.

I was on the road early yesterday for a Noon meet up time in Albuquerque. We walked our dogs to the Rio Grande river from the Rio Grande Nature Center and it was a pretty hike but whoo boy, was it HOT. I think actual temp was around 93º but it was humid and I was just dyin'.

Jake thought it was hot, too. 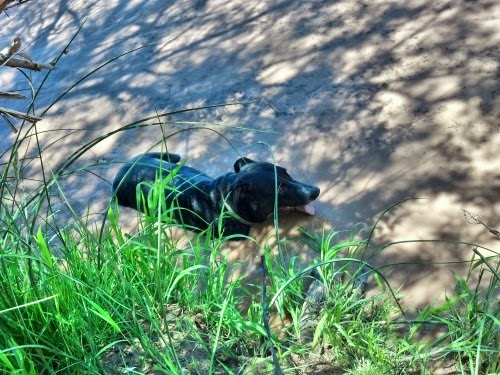 Later, we met up with some friends and went to a terrific Thai restaurant then went back to their house to hang out for the evening. I was able to park Bliss on the street at their house and that's where I spent the night. These folks have a bull terrier that is aggressively friendly with other dogs so I put Jake in the rig while we hung out in their screened in porch so that our hosts weren't constantly having to pull their dog away from Jake.

We hadn't been sitting on the porch long when we heard something scratching at the gate. Everyone looked around to make sure their dogs were accounted for and of course Jake was in the rig so what was it scratching at the gate? I went with one of our hosts to check it out and when she opened the gate, Jake came running in. What the what??

I quickly went out to the rig thinking I was going to find the door wide open and the cats both gone but it was closed. When I got close I saw that the screen was out of the door window (the window itself was open); I opened the door and found the cats and .... well .... this: 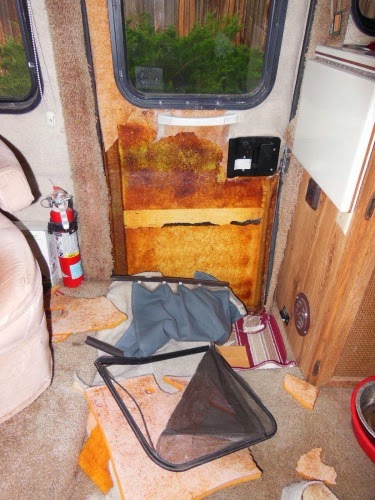 I don't know what set him off other than possibly a next door neighbor's dog that was barking a lot. I feel bad that the poor guy got so panicked and I wasn't there to comfort him. I am so so glad and relieved that he knew where to find me and didn't just run off.

I had been annoyed with the kitties earlier for scratching at and pulling loose the carpet material on the lower part of the door. Thank goodness I don't have to worry about that any more!

And now, because I can hear you all wondering, the date was/is good and it continues with a few days of camping in the forest at higher elevations southeast of Albuquerque. And that's all I'm sayin' about that. :)